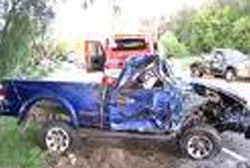 As teenagers get their driver’s licenses and hit the road, parents usually decide what their children drive, and most feel comfortable with a vehicle that’s as safe as can possibly be. A lot of times that choice is a pick-up truck because it's large, and seemingly indestructible. Parents and teen drivers, however, take note: a pick-up truck could be the most dangerous vehicle for a 16-17 year old to drive. According to a recent study conducted by the University of Texas and published in the traffic safety journal Accident Analysis and Prevention, teens driving pick-up trucks are two times as likely to be severely injured during a crash than a teen of the same age driving a car.