Business Interruption Coverage: Will You Sink or Swim? 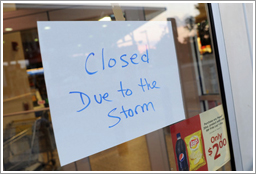 Recent catastrophic events and natural disasters go beyond the initial devastation of a business; they bring new threats and lessons to be learned.

Standard Business Income/Interruption coverage is normally triggered by unintended and direct damage to property (some forms require damage to occur to property owned by the insured). However, as seen in the cases above, some business can be significantly impacted by damage to property actually owned by others. These businesses should consider the need to purchase Contingent Business Income coverage for events that could impact their normal income caused by a direct damage loss to a supplier or key customer.

Other important business income coverages to consider are:
(note that key terms and conditions apply to each)

What lessons can we learn? Standard coverage may not be enough. Business Income/Interruption coverage is a specialized coverage that requires a comprehensive risk analysis. Ask your agent how they can help you build a strategic plan for business continuity in the event of a loss that impacts your income – one that will respond effectively for your business.