The Story Behind The Star-Spangled Banner 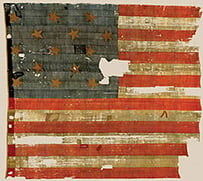 As my daughters were growing up, I would always sing to them as part of our bedtime routine. The time of year or the season usually had influence over what songs I chose. Any Olympic event or patriotic holiday would of course call for The Star-Spangled Banner - with an added twist! Not only did I sing it for them, I went through stanza by stanza and explained what it meant. No five-year-old is going to be captivated by the story – so of course it worked like a charm – zzzzzzz… they were out like a light before the “twilight’s last gleaming”! Even though they fell asleep, I still finished the story.

Here’s the nighttime history lesson my girls would get, and I hope to one day share with my own grandchildren.

Oh, say, can you see, by the dawn's early light,
What so proudly we hail'd at the twilight's last gleaming?

In 1812, America was fighting the British again. It was in the early hours of the morning that Francis Scott Key was on a truce ship watching the battle of Baltimore near Fort McHenry. Asking, hoping and praying that he could still see the Fort and the American flag that was flying overhead. As the sun began to rise – they could see that it was true, that it was still there!

Whose broad stripes and bright stars, thro' the perilous fight,
O'er the ramparts we watch'd, were so gallantly streaming?

This battle was in Baltimore’s harbor in front of Fort McHenry. Key and his comrades could see the ramparts to the fort through the smoke and fire of the battle that was still raging. The flag's stars and stripes were flying high, toying with the British, saying "Ah ha! Try as you might, you can't break our will for freedom!"

And the rockets' red glare, the bombs bursting in air,
Gave proof thro' the night that our flag was still there.

The battle lasted all night. When the rockets gave off light, they lit up the sky, enabling Key to see that the flag and the fort were still holding strong. They kept watching, waiting and hoping for the battle to turn and for the strength and fortitude of the Fort to withstand the bombardment. This also symbolizes the strength, will and fortitude of the American people and the freedom they were fighting for.

O say, does that star-spangled banner yet wave
O'er the land of the free and the home of the brave?

Key asks again…”can you see it?”…”Is it really true? Is the flag still there?" The flag held strong and was still flying over the fort, over the nation and over the brave American people who fought for our freedom and continue to be free.

That’s the story I taught my girls about how the Star-Spangled Banner came to be.

Hear what freedom means to other R&R Insurance employees.